Difference between lets and let's 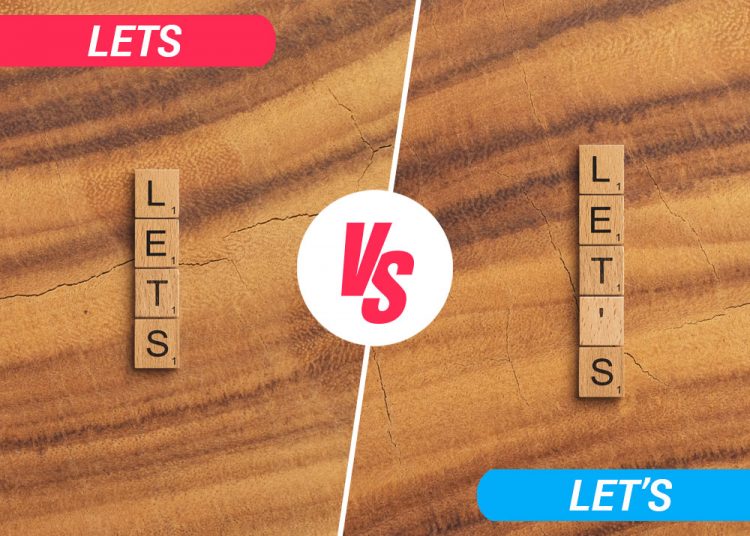 Many people take grammar lessons as kids, but it can be quite challenging to remember everything as an adult. The English language is tricky… with all sorts of rules, exceptions to rules, and even rules that aren’t actually rules (but more like guidelines).

So let’s tackle something simple, something that I’ve already used in this sentence – let’s!

If you’re unsure about the difference between lets and let’s and need a quick primer on when to use each, read on for a handy guide on how to tell them apart.

In the English language, apostrophes are generally used to indicate either possession or a contraction.

In the case of let’s, we’re concerned with the latter. A contraction is when two words, commonly used together, are shortened to improve the flow of the sentence.

In the case of let’s, the apostrophe is a way to join two words – ‘let’ and ‘us.’ It can be used when directly addressing people (to indicate that you’re talking about yourself and others) or indirectly, to address a hypothetical reader or audience.

In both cases, let’s is usually a call to action – the speaker (or writer) wants the person to do something with them.

Here are a few examples of when let’s is appropriate:

When you see lets without an apostrophe, it’s the third person form of the verb ‘to let.’

And ‘to let’ means to allow or permit.

So, for example, you can use lets in the following sentences:

In summary – the difference between lets and let’s

The easiest way to remember the difference between lets and let’s is to look for the apostrophe. When you see that telltale mark, you know that something’s missing (in this case, the letter ‘u!).

Just like ‘it’s’ and ‘what’s,’ the apostrophe takes the place of the missing letter – giving you an instant sign that it’s a contraction rather than a single word.

Now that you know the difference, you can feel more confident about using these popular terms. Your writing will be more understandable, professional, and clear!