Difference between botox and dysport 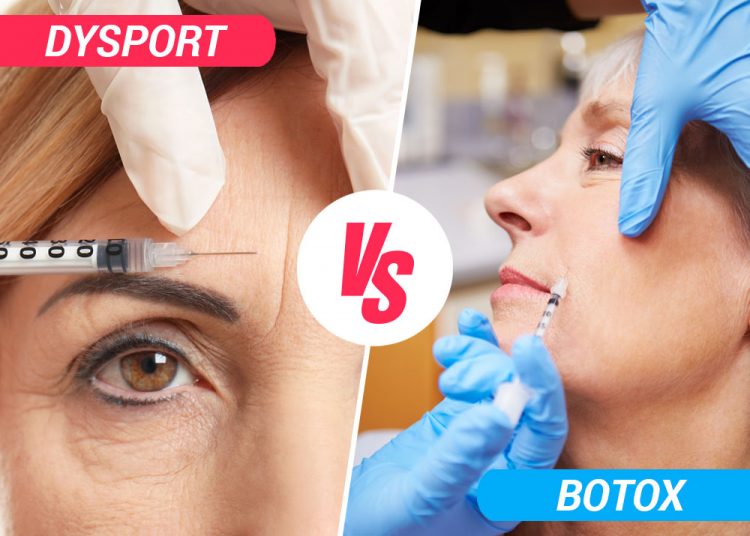 You’ve probably heard of Botox, but are you familiar with its close cosmetic cousin, Dysport?

Both cosmetic procedures claim to improve your appearance, but it’s not always easy to know which is which and whether Botox or Dysport will work for you.

Before you decide, it’s important to know what’s involved with each procedure, along with the potential costs and risks. So read on for all that info and more!

While both procedures are used to eliminate wrinkles, smooth fine lines, and mitigate the effects of skin aging, there are a few key differences between Dysport and Botox.

But before we dive into the differences, let’s take a look at what exactly is involved with each treatment.

Dysport is a muscle relaxant, approved by the FDA in 2009. Its active ingredient is botulinum toxin, a neurotoxin that’s safe in small amounts and helps the facial muscles relax.

This toxin is injected under the skin in trouble areas to firm skin and remove lines.

Botox is more widely known than Dysport simply because it’s been around a lot longer. First approved by the FDA in 1989, this is the established treatment for aging skin and remains popular today for treating crow’s feet, frown lines, and forehead wrinkles.

Just like Dysport, Botox involves injecting botulinum toxin under the skin to relax muscles and give your face a smoother texture.

What’s the difference between Dysport and Botox?

The major difference between Dysport and Botox is how they’re used.

Dysport is used to treat moderate to severe wrinkles. It’s effective for up to 6 months, with follow-up appointments recommended after that. Some people report seeing results straight away with Dysport, noting significant changes to their appearance within days.

By comparison, Botox generally takes longer to produce results and lasts up to 4 months, so you may need more regular treatments.

Dysport is a more targeted treatment, generally used on the area between your eyebrows – the so-called ’11’ where deep vertical frown lines can show up.

Botox, on the other hand, is more generalized. This treatment is a good option if you have a few problem areas (for example, around the chin, eyes, and mouth) and want wider coverage.

Dysport vs Botox – what about the cost?

The costs for each procedure are almost identical, although both vary from spa to spa.

If you’re worried about your budget, it pays to shop around. Contact a few dermatologists and spas to see if they offer competitive pricing or packages.

Considering the treatments tend to be pricey, it’s always important to avoid any temptation to cut costs by going to an unlicensed provider. Both Dysport and Botox are medical treatments and should only be administered by trained and accredited professionals.

Dysport vs Botox – what do the reviews say?

Reviews for both treatments are generally favorable but mixed, with some clients opting for one over the other.

It comes down to personal preference. If you’ve heard of Botox, you may be more comfortable with the more established injectable. If you want to try the newest version on the market, give Dysport a go.

Making that choice depends on a few factors – your needs, your skin health, and your lifestyle. Only you can decide what’s right for you!

A quick summary of the differences between Dysport and Botox

Still can’t decide what to ask for at the dermatologist’s office? Here’s a handy summary of the major differences between the two treatments:

Of course, it should be noted that the above is just a guideline. Everybody is different, and results can vary from patient to patient. Some might see lasting benefits with Botox; others may prefer the instant fix of Dysport.

As with any procedure, it’s important to do your research and talk to your cosmetic therapist before embarking on treatment. A good salon will be able to answer all your questions and help you decide what’s best for you… based on your health, goals, and budget.