Difference between bobcat and lynx 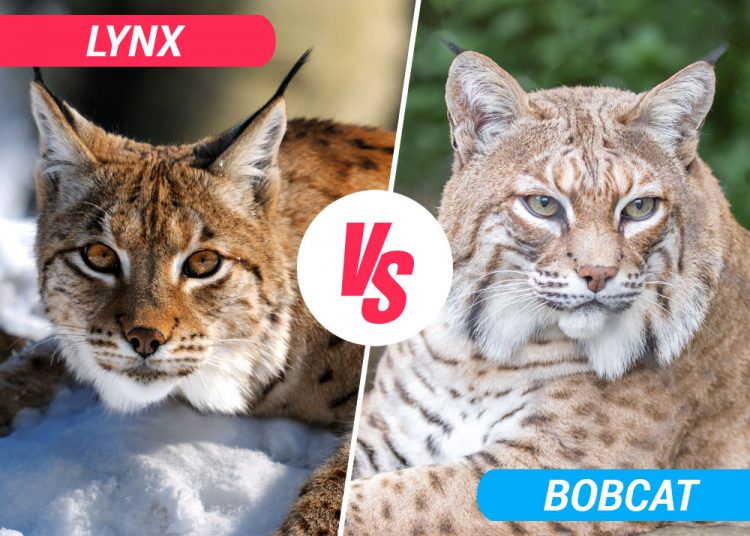 The cat family is very diverse – ranging from the domesticated pets we know and love all the way up to the king of the jungle.

Knowing your cats can be tricky, especially when it comes to two particularly similar species, the bobcat and the lynx.

Both can be dangerous, both are medium-sized cats, and both are found in North America. But, if you look closely, there are a handful of ways to tell these fearsome felines apart.

Lynx, bobcats, and the family tree

Before we dive into the differences, it’s important to note that bobcats are actually lynxes. That is, they’re technically members of the lynx family – officially known to biologists as lynx rufus.

It’s important to note that there are a lot of different members in this crowded family tree. In particular, when people refer to the lynx, they’re usually talking about the Canadian lynx.

Commonly found all over North America (not just Canada!) Canadian lynx are distinguishable from their European cousins, the Eurasian lynx and the Iberian lynx.

The Canadian lynx ranges from about 32 to 47 inches long and stands around 24 inches tall. They have a short-haired but fluffy coat that thickens in the winter to offer them protection against the cold.

These medium-sized cats are easily identified from their distinctive prints, which are big and jagged thanks to their large, hairy paws.

You’ll know you’re looking at a lynx from its broad, short head and tufted ears. Males are typically larger than females, and both have tawny coats.

Lynx are nocturnal, meaning they’re active at night. This is when they hunt, feed, and mate.

Lynx have exceptional hearing and eyesight and will use both to track and catch their favorite food – birds and small mammals. They don’t mind climbing or swimming to catch their prey and, like most cats, tend to prefer their own company rather than that of a pack.

Bobcats look a lot less intimidating than their Canadian cousins. These feral felines are about the size of a big, domesticated cat, reaching just 18 inches tall and weighing around 20 pounds.

Bobcats have a short tail, tipped with black at the end. Their coat is easily recognizable, thanks to its signature pattern of dark streaks and spots.

They’re found all over North America (from southern Canada all the way down to Mexico) but are particularly plentiful in the continental US.

While they are indeed very alike, here are a few notable differences between Canadian lynx and bobcats:

Bobcats and lynx vs mountain lions

Both bobcats and Canadian lynx are often confused for other wild cats such as mountain lions and cougars.

So what’s the difference?

Again, there’s an issue of classification at play – as, believe it or not, cougars and mountain lions actually are the same thing! Depending on where you are in North America, they’re referred to by both names. And, to make it even more confusing, they’re also sometimes known as pumas and panthers.

That said, regardless of what you call them, cougars and mountain lions are easily distinguishable from the lynx family. They’re much bigger, for one thing, as they hold the title of the second-largest cat in North America.

They’re also much sleeker, with a shorter coat than lynx and without the tell-tale streaks and spots.

Encountering a bobcat or lynx

For better or worse (likely better), you’re unlikely to see either a bobcat or a lynx in the wild. These are generally solitary creatures who prefer not to interact with humans if they can help it.

Bobcats, however, have been moving into urban areas in recent years in search of an easy meal. These cats are opportunistic scavengers attracted by any kind of food debris.

Although they don’t generally pose a threat to humans, they can attack pets and livestock.

You can reduce the risk of conflict by following a few simple steps:

When encountering bobcats, lynx, or other cats such as mountain lions, the golden rule is, don’t panic. Calmly maintain eye contact as you back away, and make yourself appear big and noisy.

If you’re hiking in an area where sightings are common, travel in groups and make a lot of noise as you journey down the trail.

Both bobcats and lynx are beautiful and fascinating animals, but they are wild and should be treated with respect. Learning their appearance, habits, and behaviors will help you know what to do if you’re ever surprised while out in the great outdoors.