Difference between cheetah and leopard 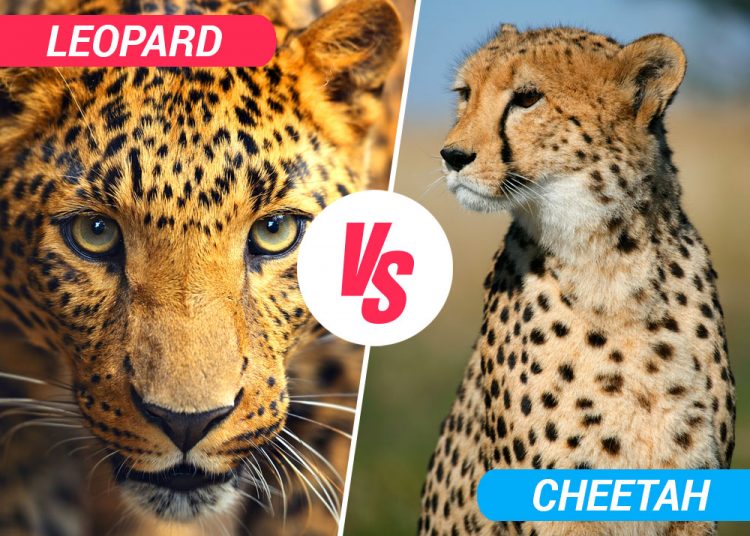 If you find yourself staring at them in the zoo or watching their antics on Animal Planet, you’d be forgiven for confusing leopards and cheetahs.

These big cats are very alike. Both are spotted, both are lean and rangy, and both could outrun you very easily.

But, if you know what to look for, there are some glaring differences between leopards and cheetahs. The clues are in the small details – their coat, behavior, appearance, and habits.

It’s a thrill to see leopards and cheetahs in the wild, but you don’t have to book a safari to learn all about these majestic predators.

Read on for fun facts about these fantastic felines, as well as tips on how to tell them apart!

Cheetahs are the world’s fastest land animals. Capable of reaching speeds of up to 120km/hr, they’d leave Usain Bolt in the dust.

Weighing around 70 kg, these are lean and slender animals built for speed. They have long legs, a flexible spine for quick turns mid-sprint, and a short, flat head.

Everything about a cheetah’s body shape is designed to help it run like the wind. Their flat tails act like rudders, allowing them to easily change direction, even at top speed.

And their intimidating claws are non-retractable, meaning they don’t retract back into their feet. The big advantage of this is that it enhances their grip and provides more stability.

Cheetahs have a very distinctive coat, patterned with solid black ovals or dots against tan fur. They have bright, amber eyes and very noticeable black ‘tear’ streaks extending down from the inner corners of each eye and along the side of their nose.

Thanks to their love of speed, cheetahs generally hang out on open grasslands – where they can see their prey from a long way off and have plenty of room to accelerate on the hunt.

They’re typically solitary, preferring to hunt alone and live up to 10 years in the wild.

Cheetahs may have the speed advantage, but leopards have all the muscle.

These animals are smaller yet stockier than the other big cats, needing plenty of chest and shoulder muscles to bring down their prey and drag the carcass up trees.

Leopards are nocturnal, meaning they’re most active at night. They can live almost twice as long as a cheetah, with some surviving 17 years in the wild.

These feline hunters like to stalk and ambush their prey, using their rosette-like markings to blend into the dense tropical undergrowth.

Just as cheetahs are built to run, leopards are built to climb. They have a round tail (useful for clinging onto trees), muscular chests, and large front paws with retractable claws to help them grip branches.

One detail that usually trips people up when it comes to distinguishing cheetahs from leopards is their coat.

While both these cats are spotted, they aren’t quite the same. Look closely, and you’ll see that cheetah spots are more round and oval.

In fact, a leopard’s spots aren’t technically spots at all. They’re known as rosettes, and they look like a blob of yellow surrounded by thick black lines – forming a kind of rose pattern. These irregular rosettes form a more complex pattern than you see on a cheetah.

Leopard vs cheetah vs jaguar (and the other big cats!)

Of course, there are other members of the big cat family worth mentioning.

The major differences between leopards and cheetahs – a summary

Here’s a quick summary to help you remember the difference between leopards and cheetahs:

Size & shape – cheetahs are taller and more slender than leopards. Leopards have more muscle, making them stockier, stronger, and shorter. Cheetahs are built for speed, leopards to hunt.

Coat – Cheetahs have spots all over their tan fur. Leopards have rosette markings and are mostly yellow.

Tail – Cheetah tails are flatter and broader, like a rudder. Leopard tails are more rounded to give them stability when climbing trees.

Head – Cheetahs have flat, broad heads with short noses. They can also be identified by their unique ‘tear’ lines and amber eyes. Leopards have longer heads, with dark spots on their muzzle and green or blue eyes.

Hunting – Leopards hunt at night and prefer to stalk their prey through the undergrowth. Cheetahs do best on open plains, where they have plenty of room to run after their quarry.

Lifespan – Cheetahs can live for 10 years, leopards around 17