Difference between pint and quart 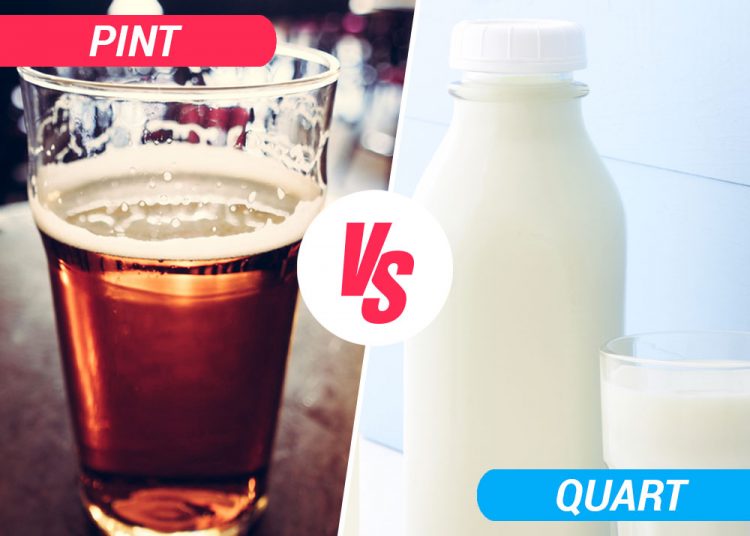 Order a beer at the bar, and you’ll get a pint. Go out for milk, and you might pick up a quart. But which gives you more – the pint or the quart?

Here’s a quick summary of the difference between pint and quart so you can know your numbers!

To fully understand the difference between quarts and pints, it’s first useful to know your units of measurement.

The British and US use different systems when it comes to weights and measures. The US follows the US customary system, whereas the British adopted the imperial or, in some circumstances, the more modern metric system.

This is why things like baking directions can vary from one side of the pond to the other.

In the US customary system, there are two types of quart – liquid and dry. In the British imperial, there’s just one, which is applied to both dry goods and liquids. In both the US and Britain, a pint is an eighth of a gallon.

Now, before things get too complicated, here’s a simplified version.

A US quart and a British quart are both equivalents to 2 pints:

So far, so good. But in reality, a quart in the US will get you slightly less than a quart in Britain.

Why? Because while both the US and the UK consider a pint an eighth of a gallon, their definitions of a gallon are different, and therefore an imperial quart is 20% more than a US customary quart.

Quart vs pint – some real-world examples

If you’re having a hard time picturing a pint or a quart, the following examples might help:

And, in case you need more comparisons, here’s a helpful chart:

Still lost? Sometimes it helps to avoid getting caught up in all the complicated conversions. The easiest way to keep track of your quarts and pints is to remember that a quart is twice the size of a pint.