Difference between wolf and coyote 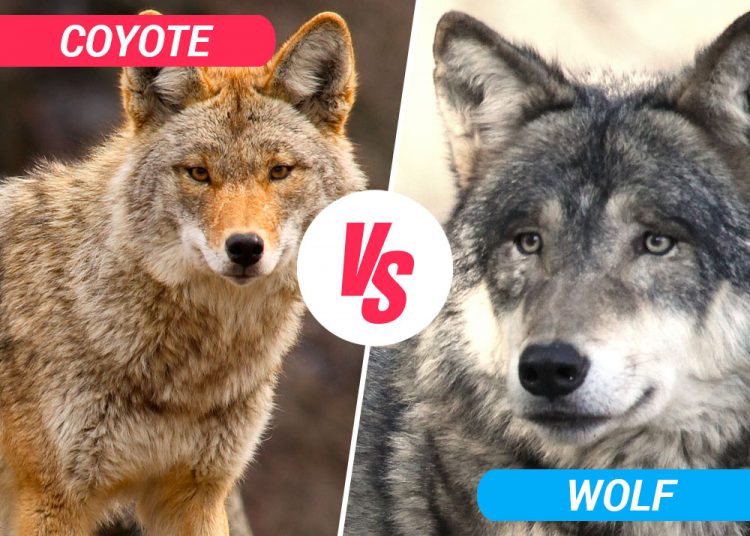 They’re both North American predators, they’re both in the canine family, they can both be dangerous – but what are the differences between coyotes and wolves?

And, more importantly, how can you tell them apart if you encounter one?

If you’re not sure whether those howls you hear at night are a wolf or that feral snout you just glimpsed belongs to a coyote, here are a few telltale signs of coyotes and wolves to consider.

The first thing to note is the animal’s appearance. Try to pay close attention to its size, coat, and face.

Coyotes are smaller than wolves. They can weigh up to 50 lbs, while an adult wolf can reach 150 lbs. Coyotes are also shorter – they stand around 24 inches tall, but wolves can grow to 32 inches.

If you see tracks around your property and wonder whether they belong to a coyote or a wolf, check out their size and edges.

Wolves have much bigger feet than coyotes (sometimes as large as an adult hand!), and their pawprints aren’t as well-defined as a coyote’s (wolves have more hair on their feet). A coyote’s marks are half the size of a wolf’s and much easier to spot.

Not only are coyotes smaller than wolves, but they also look quite different.

Coyotes have a distinctive muzzle, their noses are small, but their snouts are quite long and almost pointy. Their lean, narrow face makes them more like foxes than wolves and similar to foxes; they have large, tall ears.

Wolves, by comparison, have broad faces. They’re essentially the opposite of coyotes with large noses and short, rounded ears.

If you think you see a wolf or a coyote, the easiest and quickest way to tell them apart is their fur.

Coyotes are usually brown or pale yellow, whereas wolves can be either grey wolves or red wolves.

Of course, the names aren’t always completely accurate. Grey wolves may be a very dark grey, almost black, and red wolves are typically more of a reddish-brown. Both may also have patches of darker or lighter fur.

Coyotes and wolves behave very differently. One’s a brash, noisy scavenger, the other a reclusive hunter.

As urban development encroaches more and more upon rural areas, coyotes are increasingly intruding into cities and neighborhoods across North America. They’re opportunistic animals – always on the lookout for an easy meal.

If you see something sniffing around the town garbage, it’s much more likely to be a coyote than a wolf.

Wolves are more hesitant around humans; they tend to stay away and prefer the security of forests and other wilderness.

Coyotes, on the other hand, have learned that humans are often around food. Coyotes are far less skittish and will be quite brazen in their search for a quick snack. While wolves eat meat, coyotes will eat almost anything!

Another main difference is that coyotes range around in loose packs; these social groupings are less structured than wolf packs. Coyotes prefer to do their hunting alone, as that means more food for them.

Wolves are known for that instantly recognizable call… long, melodic, and low-pitched.

Coyotes, on the other hand, emit a high-pitched howl, a bit like a shriek. They’re noisy intruders – barking, yelping, and yipping.

At times, coyote calls can sound almost human and very eerie. If you’re hearing uncanny screaming or laughing in the night, it’s not ghouls; it’s coyotes.

Both coyotes and wolves are nocturnal, meaning they’re more active when the sun goes down.

They can also both be dangerous.

Wolves are less of a threat to humans, in part because we don’t encounter them as much. They like to keep to their territory and are more likely to flee than pick a fight, especially if you appear big and threatening.

Coyotes, on the other hand, aren’t as wary of humans. Fortunately, attacks are unlikely and very rare, but they do happen.

As coyote populations increase, these invaders are growing bolder and are known to go after small prey like pets. If you live in a coyote-prone area and have cats or smaller dogs, be careful about letting them roam at night.

Unlike the ever-adaptable coyotes, wolves are in decline. Red wolves, in particular, are among the world’s most endangered species. Gray wolves were removed from the US endangered species list in January 2021, but some conservation groups opposed the move as premature, saying populations are rebounding too slowly to be considered stable.

Whether you encounter a wolf or a coyote, the most important thing to remember is to keep your distance, don’t approach, and carefully move away. If the animal is injured or behaving erratically, be especially cautious and call your local authorities to make them aware of the situation.