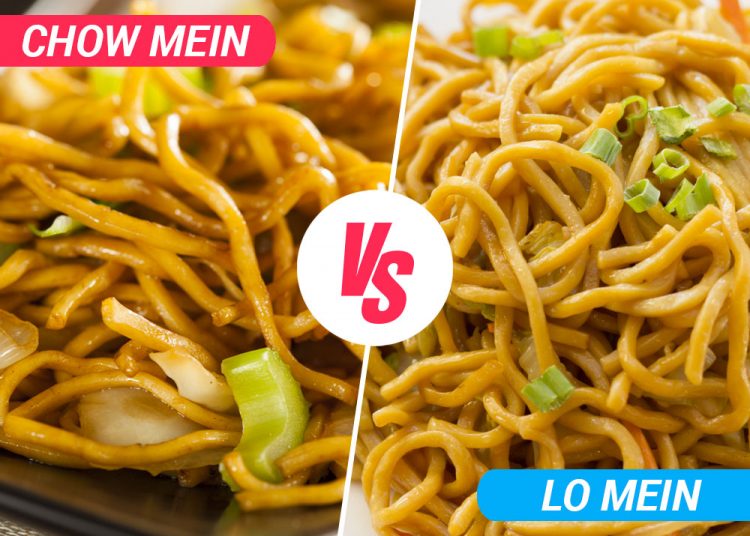 It’s a familiar dilemma – you want tasty Chinese takeout for dinner, but one glance at the menu and you’re confused. What’s chow mein? What’s lo mein? Are the noodles thick or thin? Rice or wheat?

Luckily, we have the answers. Read our quick guide to the difference between lo mein and chow mein so you can know your noodles and stop stressing over supper.

If you’re going to know your way around these classic Chinese favorites, it helps to learn a little bit of the language.

And that’s your first major clue to the main difference between these dishes.

As you can probably tell from the names, the big thing that sets lo mein and chow mein apart is the cooking style.

Chow mein involves stir-frying your noodles in a frying pan or wok, usually along with protein, veggies, and a tangy soy sauce.

Lo mein noodles are boiled in broth or water, then stirred or tossed into the rest of the ingredients. They can also be set aside to heat up and add later.

They may vary in cooking method, but there’s not much difference between the actual noodles involved in both chow mein and lo mein.

Both use round noodles made with wheat flour and egg. These are generally thick, loose noodles with a melt-in-the-mouth texture.

Chow mein and lo mein are usually served with a variety of options. Vegetarians can enjoy noodles with scrambled egg and/or shredded vegetables such as cabbage, broccoli, and peas. Meat-lovers can pick either chicken, pork, or beef lo mein and chow mein. Fish fans can opt for shrimp.

There’s a lot of variation in Chinese cuisine. Classic recipes are altered and tweaked from region to region and from generation to generation.

While you’ll find many differences from restaurant to restaurant, lo mein and chow mein are generally served with certain sauces.

With its tender noodles cooked in a rich broth, lo mein is usually paired with light sauces. The sauce is prepared separately, and the noodles are added at the end.

Chow mein typically comes with a darker, richer sauce. Here the noodles are fried in the sauce or thoroughly mixed in when the sauce is added towards the end of cooking. This gives them more time to soak up all the fragrant flavor.

Chop suey is actually not an authentic Chinese dish but rather a Chinese-American hybrid.

Much like chow mein, it’s a noodle stir-fry and a one-pot meal where almost any type of veggies and protein would work.

Served in a sweet and sour sauce, there’s very little difference between chop suey and chow mein, but every cook has their own interpretation of this fusion food.

If you’re looking for a healthier option for dinner, go for lo mein over chow mein. Lo mein noodles are boiled rather than fried, so there’s less grease involved.

Because chow mein noodles are fried, they tend to be crispier than lo mein (which are softer and more tender). So if you want something to slurp up with your sauce, pick the lo. If you’re looking for something with added bite, pick chow!

Of course, every restaurant and every cook has their own way of doing things. If you’re a fan of Chinese food, you’ll notice a lot of variation between takeouts. Some might use dried noodles, others fresh. Some prefer flat noodles, others round.

And then there are the cooks who love to douse their noodles in a ‘special’ sauce (and will take the recipe to their grave!).

The only way to find your favorite is to experiment! And why not try making your own? Both chow mein and lo mein are relatively easy to master for the home cook.

Cooking is a creative process, so have fun playing around with the basic recipe. You may even stumble upon your very own version of chow mein and lo mein!