Difference between latter and former 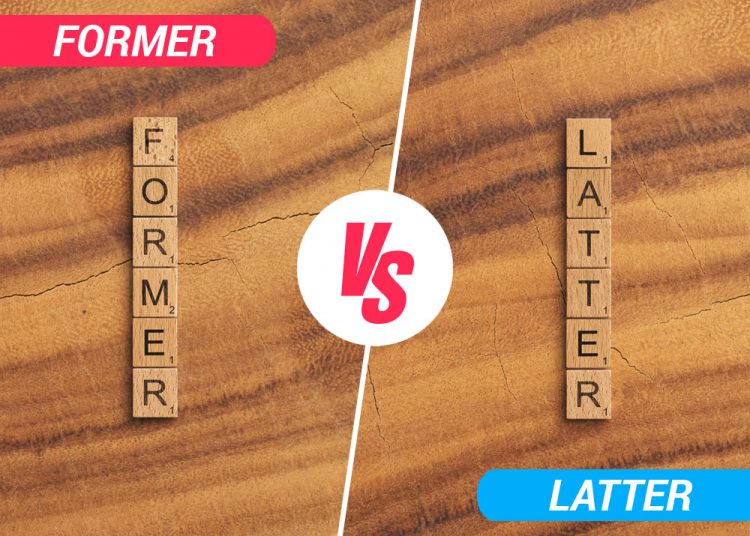 The English language is full of problematic phrases and grammar hang-ups. So much so that even the experts get it wrong sometimes.

Alas, it’s worth taking the time to get your terminology right. Tidying up your grammar blind spots can help you sound more professional and properly express what you’re trying to articulate.

If you’re always getting stuck on whether to use ‘latter’ or ‘former,’ read on. These terms are often used interchangeably (and incorrectly, unfortunately), but there are very distinct rules about when they should be applied.

Learn these rules, and you’re on your way to concise and clear communication!

When we use former and latter

Before we dive into the differences between former and latter, it’s worth noting one big similarity – both are mainly used in writing rather than speech.

They’re also much more common in formal writing, such as academic papers or professional memos.

Former and latter generally go together and are used to identify items in a series or sequence.

Former vs latter – definition and examples

When you use former and latter in a sentence, it’s usually because you want to qualify something and need to let your reader know which of the two objects mentioned that you’re referring to.

For example: “I have a dog and a parrot. The former loves going for walks, and the latter does not.”

Former refers to the first object (the dog), and latter the second (the parrot).

Here’s another example: “I met my brother and my sister for lunch. The former ordered salad, the latter chose soup.”

Now your reader (or listener) knows that your brother had salad and your sister had soup.

Other meanings of former and latter

To complicate things, both former and latter can be used as adjectives.

Former is sometimes used to refer to things that happened in the past or are related to a past event.

Similarly, latter doesn’t always refer to the second item in a series. It can also be used as an adjective to describe something near the end or someone or something that’s just been mentioned.

A tip for remembering the difference between former and latter

If you’re still struggling with former and latter, here’s an easy few tips to help you remember.

And, if that doesn’t work, it’s also helpful to note that latter contains the word ‘late’… and late things typically come last!