Difference between cat5 and cat6 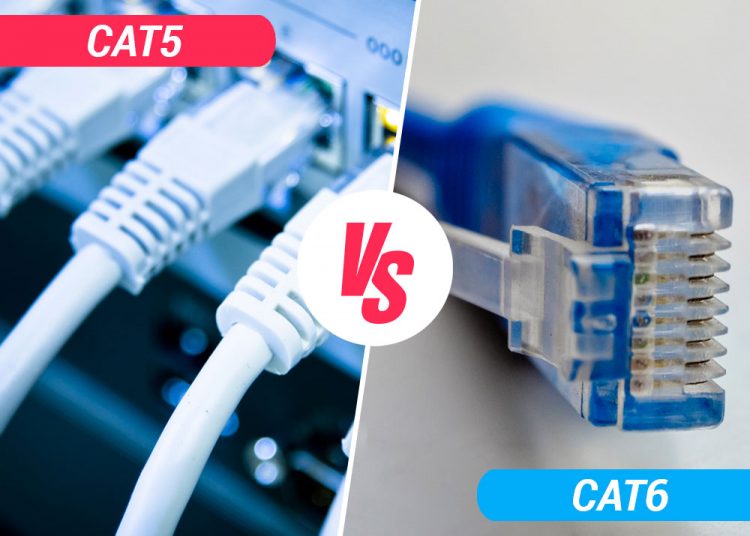 Trying to decide between Cat5 or Cat6?

If you’ve ever taken a close look at the tangled mess of cables sprouting from a computer, you’ve probably seen either a Cat5 or a Cat6 cable lurking in there.

These are the all-important ethernet cables that connect your device to the internet.

They’re the reason you can browse online, answer emails, take Zoom calls, etc. That’s why it’s important to know the difference between all the different versions, as well as what they do and whether you’re using the right one.

Cat5 and Cat6 ethernet cables connect one device to another. They’re most commonly used to link computers to modems so they can access the internet.

Yes, even in the age of wireless, cat cables still have tremendous value! Not only do some people simply stick with what was once set up in the past, but hard-wired ethernet cables typically offer faster speed, more secure connections, and even increased stability/reliability vs wifi.

With demand always growing for more and more bandwidth, cables are continually being upgraded to deliver faster speeds and better performance.

Cat5 and Cat6 have different specifications when it comes to speed and bandwidth capacity. They also vary in price and compatibility with certain devices.

To figure out whether you should be using a Cat6 or if you can rely on a Cat5, we first have to look at the basics of each.

Cat5 cables are the generation before Cat6. They’ve been in use for several years, successfully connecting computers to Local Area Networks (LAN).

These cables are designed to handle 10/100 Mbps at a 100 MHz bandwidth. They can also carry telephone and video communications.

In 2001, a new version of the Cat5 was introduced – Cat5e. This upgraded cable delivers around the same speeds but with improved performance.

Cat6 is the new, improved version of the Cat cables, created to deliver faster, better internet.

These have a bandwidth capacity of 250 MHz, with speeds of up to 10 Gbps. All Cat6 cables are also compatible with both Cat5 and Cat5e Ethernet cables.

Because of their enhanced functionality, Cat6 cables are generally more expensive than Cat5. They also look a little different as they’re thicker.

For the average household, Cat5 cables are fine. They’re the classic cable – reliable, inexpensive, and efficient. These can easily handle your home’s internet, Smart TV, and any other devices you have on your network.

That said, if you often find your internet lagging (and you’re frequently downloading large files or streaming heavy amounts of data), you may want to look into connecting with a Cat6.

These are great at handling large volumes of data and are the cable of choice in commercial settings like offices and businesses. They’re a good idea if you work from home on a busy network and/or you often have internet connectivity issues.

Cat6 cables are also handy if you notice a lot of crosstalk (signal interference) on your network. It cuts down on interruptions in service so you can enjoy reliable internet even at high speeds.

This cable offers speeds of up to 10Gbps and has a bandwidth capacity of 600MHz. It’s important to note that the Cat7 is a little more specialized and, as a result, doesn’t have the compatibility of the Cat5 or Cat6.

Considering that Cat7 cables are still not that common, it’s unlikely that you’ll need one. There have been cases where Cat7 is sold as Cat5 or Cat6, however, so always check your cable before buying. You can do this by looking along the cable’s sheath for the number.

If your internet is running smoothly, and you’re happy with the speed, great! No need to switch out anything. You’re probably using a Cat5 cable, and that’s obviously fine for your needs.

If, on the other hand, your service is patchy and you’re constantly frustrated by lagging speeds, failed downloads, and frozen screens, you may want to think about switching your cables.

Do a bit of troubleshooting first to assess the problem. There’s always a chance your issue is with your internet provider, or there’s a problem with the modem or your computer.

Once you’ve ruled out more obvious options, check those cables!

Upgrading to a Cat6 could offer you better performance, faster speeds, and greater data. It’s a little more expensive, but you’ll be guaranteed better service and less crosstalk.