Difference between fiddle and violin 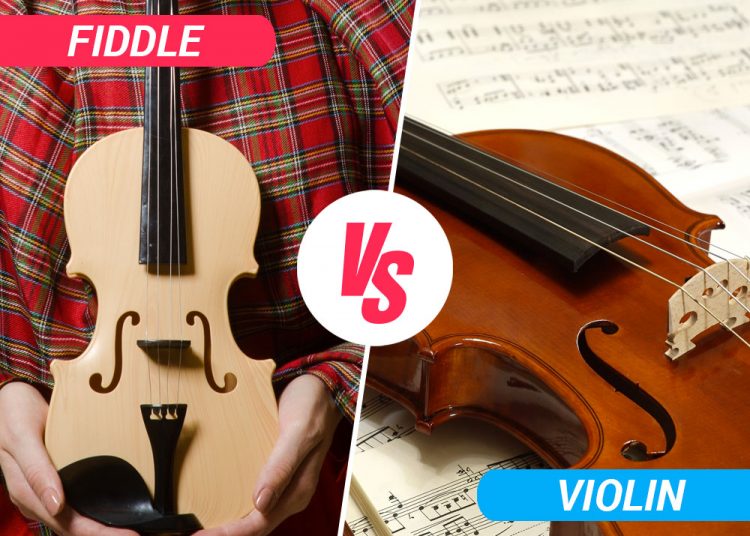 It’s confusing, without a doubt, but both terms are used interchangeably to describe the same member of the string family. The only difference is the context.

If you think of fiddle as slang for the violin, you’re on the right track.

So which is it? Fiddle or violin?

People tend to use the term violin in classical settings, especially when describing an instrument used in an orchestra or other formal environments such as a musical quartet or concert.

If you’re listening to a violin in a pub jam session, however, or hearing a violinist doing an impromptu show on the street, you’re more likely to hear it referred to as a fiddle.

Generally speaking, the fiddle is associated with country, folk, or traditional music, whereas the violin is considered more classical.

While the instruments are essentially the same, there are a few variations when it comes to the shape of violins or fiddles.

Both have four strings, but the shape may be different – especially when it comes to the bridge.

Fiddlers often prefer an instrument with a flatter bridge. This makes it easier to play the signature double stop and triple stop sequences associated with folk and traditional music.

If you’ve ever heard a fiddler cascading through notes at lightning speed, you’ll get some idea of the speedy beats that are a hallmark of jaunty traditional tunes.

Classically trained violinists, on the other hand, may favor a rounded bridge. This gives them a better range of motion to articulate the complex scores of classical music pieces.

Both violins and fiddles have four strings, typically tuned to G3, D4, A4, E5.

Historically speaking, violins were distinguished from the more common fiddle by the material used in their strings.

Fiddles were a low-budget and often homemade version of the classical violin, so the strings had to be cheap. They were typically made from steel rather than the more expensive gut strings.

Fiddle vs Violin vs Viola

Violins/fiddles are often confused with their smaller cousins, the viola. But violas are an entirely different member of the string family, with their own sound, shape, and size.

Violas tend to be slightly larger than violins. They’re also tuned lower, making them more suitable for the lower registers.

Violas have a more mellow sound than violins. The tone is low, melodic, and rich.

Fiddles and violins are arguably the same instruments – a four-stringed bow.

The difference is in how they’re played. You’ll see violins referred to as fiddles when they’re used informally – at casual concerts, traditional dances, and family gatherings.

On the other hand, the string instruments you see in an orchestra are more commonly called violins.

Fiddle is basically a nickname for the violin, used informally. While there may be slight variations in the bridge and the strings, the terms can be used interchangeably.