Difference between apart and a part 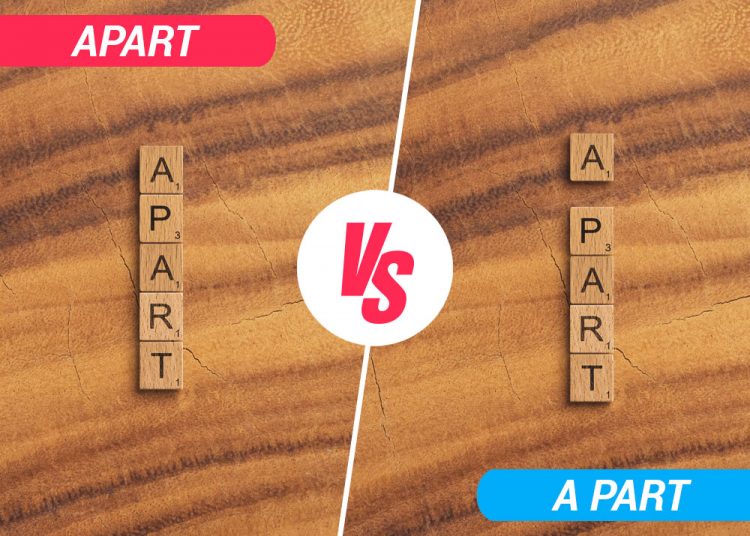 They may sound the same, but a part and apart have very different meanings. Especially if you’re not a native speaker, these homophones (words that sound the same but have different definitions) can easily confuse you.

So let’s look at how to use them and what they mean. Once you understand the basics, you’ll be able to use both a part and apart with complete confidence – all while making your writing more accurate and clear.

A part or apart – definition

The major difference between a part and apart is that one can be used as either an adverb or an adjective, and the other is a phrase.

Apart can be used as both an adverb and an adjective. When it’s an adverb, it’s used to show an object is separate from other objects.

For example: I’m going to take the toaster apart and put it back together.

When apart is used as an adjective, it’s a descriptive word that follows a noun.

For example: Africa is a world apart.

A part is a phrase, indicating something viewed in context as part of a whole.

You’ll find that you can omit the ‘a’ in a lot of instances. This is generally used to improve the flow of a sentence and make it sound more natural. Be careful though – if you’re referring to a specific object, you can’t ditch the ‘a’ without losing the sentence’s meaning.

A part or apart – examples

Sometimes a part and apart appear in the same sentence or paragraph. Although this may seem confusing at first, it’s easy to figure out what goes where if you focus on the sentence’s meaning.

Remember this golden rule, and you’ll never go wrong with a part and apart.

And that’s it! That’s all you need to understand and use these common terms correctly. You’re well on your way to becoming a grammar genius!