Difference between jail and prison 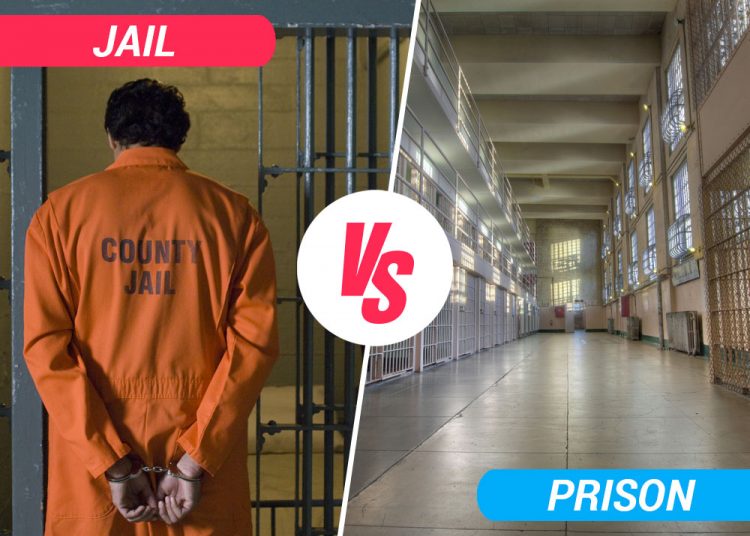 What’s the Difference Between Jail and Prison?

It’s pretty common for people to talk about jail and prison as if they’re the same thing, but there are quite a few differences between these correctional institutions.

Commit a crime, and you’ll end up in one or another. But whether you’ll spend your sentence in jail or prison depends on a couple of key factors. Throughout this article, we’ll introduce both institutions and help make a distinction between the two.

Generally speaking, jail is for small-scale crimes and misdemeanors. Jail houses criminals serving shorter sentences (compared to those in prison), and therefore the conditions are usually less restrictive.

In the US, jails generally fall under the auspices of the County Sheriff’s office. They can range from tiny buildings in small towns (meant to keep people for very brief stays before they’re released or transferred) all the way to large buildings that service vast communities.

The inmates of a jail fall into two categories – those who’ve been convicted of a crime and those who haven’t.

Often the incarcerated are confined to jail while they await trial. If they can’t pay their bail or bail is refused, they are kept in jail until their court date.

Prison is for serious offenses. A more severe form of punishment than jail, prison houses criminals who have committed a felony.

Prisons are generally much larger than jails and are run at the state or federal level. They have more inmates and are more secure. Some prisons are privately owned.

What are the key differences between jail and prison?

Summary – why does it matter?

According to a 2020 report from advocacy group Prison Policy, the US criminal justice system holds almost 2.3 million people in 1,833 state prisons, 110 federal prisons, 3,134 local jails, and other corrective institutions.

There has been some controversy over the incarceration system due to the differing standards between jails and prisons.

Given that they’re designed for short-term stays and as a temporary holding place for innocent people awaiting trial, jails are pretty basic. Some are housed in outdated buildings that are not properly maintained; some are too small for their community’s needs; some lack even the most basic services. Almost all are under-funded and under-staffed.

Prisons, while obviously not intended to be comfortable, are generally better equipped. They often provide educational programs, work schemes, basic amenities, and exercise facilities. As they’re intended for long sentences, the sleeping arrangements usually meet a higher standard than most jails.

While keeping criminals comfortable is not the prerogative of the justice system, the disparities between jail and prison matter. Why? Because not everyone in jail has committed a crime. Many have not even been to trial and are therefore granted the presumption of innocence.

The debate around prison and jail reform is a complex one. But now that you know the definition of jail and prison, hopefully this helps paint a picture of the differences between these two concepts and the part they play in the overall US justice system.